Rock & Roll Rumble 2023 is confirmed for April at
The Middle East and Sonia in Central Square, Cambridge. 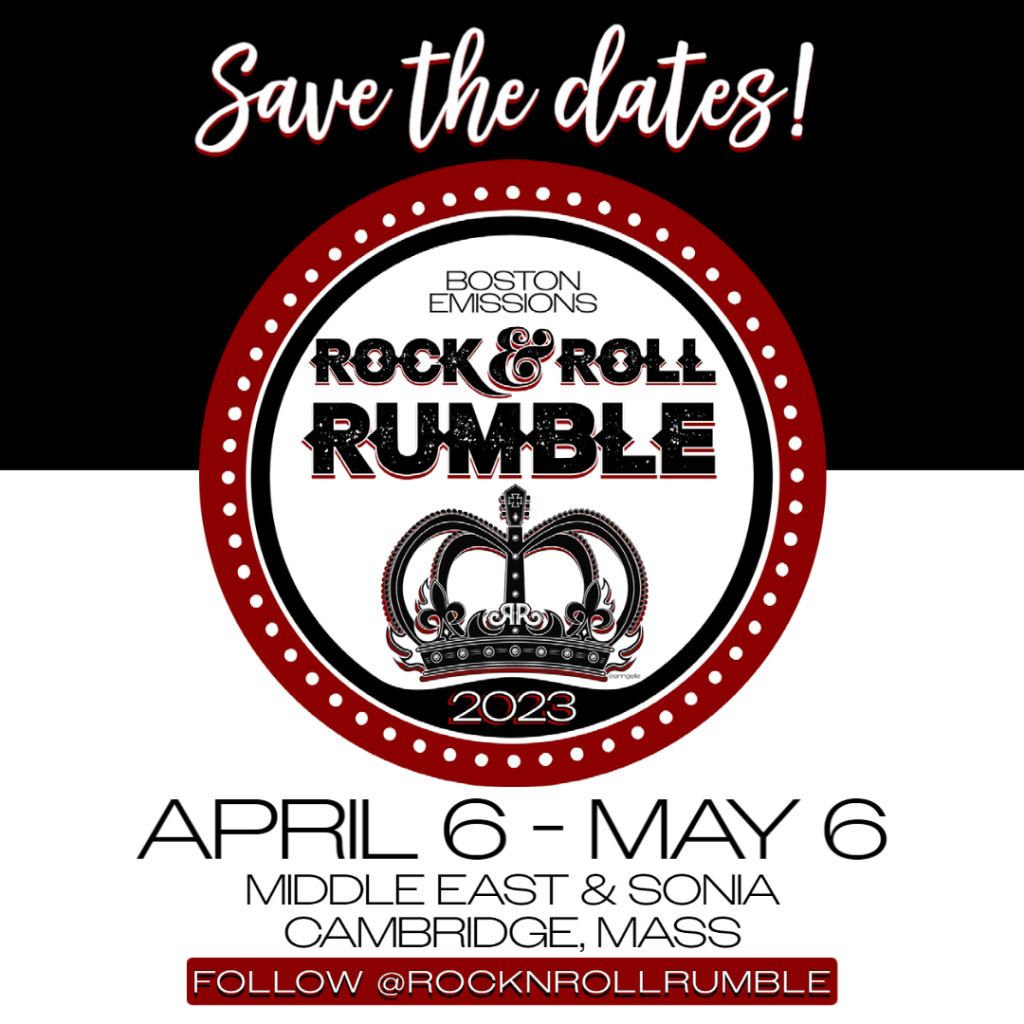 October 13, 2022, Cambridge, Mass – Celebrating nine nights of blistering live rock and roll this spring, Rock & Roll Rumble is a go for April 2023. Heralded as The World Series of Boston Rock, the Rumble has been an anchor in showcasing live music and fostering community in the music scene. The Rumble will be partnering with local organizations, seeking out new sponsorships, and reaching out for prize donations.

For more than forty years, the Rock & Roll Rumble has been a cornerstone in the live music scene to celebrate bands from the region. A rite of passage, a goal set by many local musicians to be among the list of the city’s luminaries who’ve taken part. Since Boston Emissions radio host and organizer Anngelle Wood took over in 2009 while still with the event’s founders – the gone-but-not-forgotten radio behemoth, 104.1 WBCN, the Rock of Boston – the Rock & Roll Rumble has seen its share of stops and starts. The most obvious being the 2020 Rumble year – planned and canceled twice. The years that followed saw new challenges – the safety of friends and fans, a limited number of practical venues to house the Rumble and, in all fairness, bands who were not able to actively meet, rehearse, and perform. The reality is that the Rock & Roll Rumble couldn’t happen.

Why is that? Boston Emissions host and Rock & Roll Rumble curator/producer/host, Anngelle Wood, says this: “The Rumble is a beast. It’s months of planning and nothing at all like regular shows in any way. Not everyone gets it. That saying, ‘it takes a village’, is real in the context of the Rumble and has never been more meaningful. Now, three years later, I want to give the city back something it has loved and missed. After many long talks with Aaron Gray, talent buyer with the Middle East and Sonia and promoter with Grayskull Booking, I felt at ease working with him as he knows and understands the legacy of the Rock & Roll Rumble.”

Submissions for Rock & Roll Rumble 2023 will be accepted beginning Thursday, October 13 as a courtesy for all active New England-based bands to submit information in a thorough and deliberate manner. Rock & Roll Rumble consideration has always been based on submitting music to Boston Emissions directly and it remains as such. Other criteria apply.